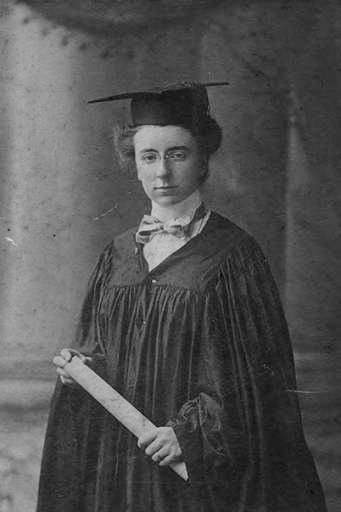 This is the graduation portrait of Mary Adele France in 1905; she was also one of the first women to receive a bachelor’s degree from Washington College./Wikimedia Commons

The Guardian‘s Tamsin Rutter explores the age-old(ish) question in a piece this week that covers both sides of the issue well, but as a graduate of a fancy J-school, a longtime journalist, and a journalism teacher, I have strong feelings about this issue. Bottom line, in my opinion: Yes, you need some kind of serious training. No, you don’t need a post-graduate degree per se.

I have a bachelor’s degree from Northwestern University’s snooty Medill School of Journalism, and I paid a ton for it. That said, I think it was worth it: They trained the crap out of us for the real world as much as possible. They beat real-world sensibilities into us—for instance, giving us overachievers an automatic F if we made even the tiniest factual error. (For kids used to getting straight A’s in high school, there was no greater terror, therefore, than writing a beautiful piece but failing simply because we got a name-spelling wrong.) They constantly told us how dire the job market was, and this was back in the ’90s, when people at least still paid journalists for the most part. They told us the only way to overcome this was to get internships constantly during college. Real life experience would trump everything, they said. They were right, which is funny, since we were paying them more than a hundred grand to give us four years of non-real-world experience.

That, however, was crucial, too: We learned to balance great writing with great reporting. We learned how the media business worked. We learned media law and ethics, possibly the most crucial part of our education. We understood what was at stake when we wrote about other people’s lives in public forums. We took our responsibilities seriously.

I considered getting a master’s degree, but only for one reason: because they are usually required for teaching jobs, and I knew I’d want to teach someday.

At one crucial juncture in my life and career, I faced a stark choice: get a master’s in San Francisco, where I’d gotten into a program, or go to New York City with the man I loved at the time? I followed my heart, but I also factored in an economic decision: In New York, I could get even the lowest job in magazines, where I’d always wanted to work, and still at least make some money. If I went to San Francisco, I’d just wrack up more debt at a time when I was still paying off undergrad. I chose New York and eventually got a gig as an assistant at Entertainment Weekly. I worked my way up there for ten years, and now I get to write about pop culture as a freelance writer and author full-time.

I also, incidentally, get to teach, though it hasn’t been as easy as it would have been with a master’s. Luckily, Columbia University’s graduate journalism program values experience as much as advanced education, recognizing how much real-world practice counts for in this particular profession. I can vouch for this position as much as I can vouch for the education I got at Northwestern: I probably learned as much about journalism in my first year of working full-time at a local newspaper as I did in four years of school.

The fact is that journalists need about a 50/50 balance. We don’t know anything about real journalism until we’ve worked in the real world, where you make every possible mistake—flubbed interview, missed opportunity on the scene, giant error immortalized in print, somebody’s life affected by what you wrote. But we also need the basic grounding of education, some kind of training in reporting, ethics, and law. That could come from a journalism degree, undergrad or beyond, or it could come from taking extra classes while already working in media. One way or another, in real life or theory, the hard way or the easy, we have to learn—that’s what sets us apart from the irresponsible blogging masses.